Team 5672 joined the First Robotics family in 2015, our first competition was in North Bay, ON in March. We placed 13 out of 36 teams – the top 1/3 of our Regional Competition. We were the highest-seeded rookie team, and we were alliance captains in the championship rounds.

Sponsors Near and Far

Team Sponsors came aboard during our Second Season. 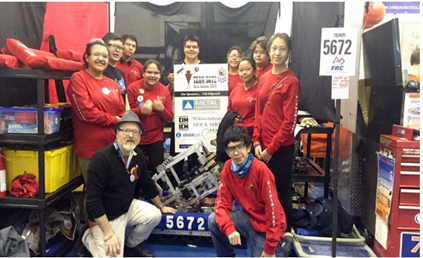 Metal Supermarkets is a stock metal supply franchise across North America, and their president, Chris Hare, has a camp on the Island.  He contacted the team and became a major supporter.  The Wikwemikong Hock Shop stepped forward with a car raffle for the team, allowing for the opportunity of deep grassroots support. 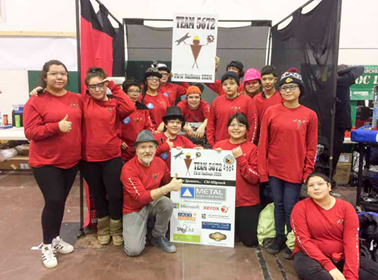 In our third year, each component of our build – design, programming, building – was led by a female member of our team.

In our fourth year, we were once again alliance captains in our Regionals, finishing 10th at the Georgian College Regionals.  We also won the Engineering Inspiration Award for our work inspiring other First Nations communities in STEM. 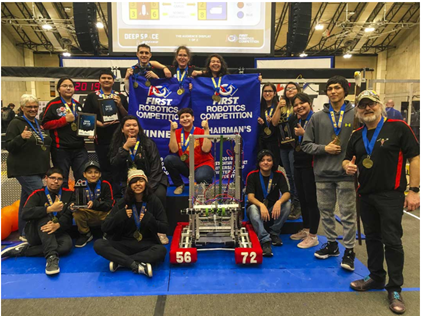 We Are the Champions!

In March 2019, we won both the Chairman’s Award and the Championship in Waterloo.

We also set a world record high score during the semi-finals of the competition.

Our own Mary Pangowish won the Dean’s List award.

We Are the Champions – Part 2

After our amazing showing in Waterloo, we qualified for the Canadian Championships in Mississauga.  We placed top three in the Chairman’s Award.  Our standing qualified us for the FIRST Robotics World Championships in Detroit, April 2019. 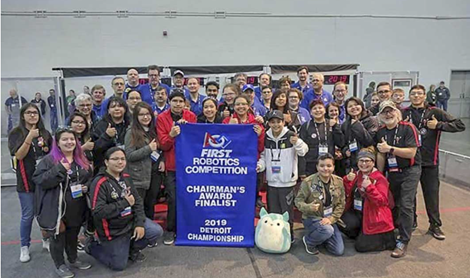 At the Detroit World Championships, there were 600 teams and 20 000 competitors.  We were top 3 out of 600 teams from all over the world for the Chairman’s Award!

We were the first Indigenous team at the World Championships.

We are only the second team in Canada to achieve this.

We were also the youngest team to ever achieve this.

The team looks forward to continuing to inspire young First Nations students to be active in STEM!